Send questions to Heart of the Valley Astronomers

Canes Venatici is one of the constellations that is often viewed in the early years of many astronomer's enjoyment. This is largely because it's easy to find - just underneath the handle of the Big Dipper on one side and next to the brilliant star Arcturus on the other. While this often leads to the constellation being overlooked, these neighbors fortunately make Canes Venatici fairly simple to locate. Canes Venatici contains some truly impressive objects that belie the constellation's modest façade.

Canes Venatici translates as the Hunting Dogs - this is supported by similar labels; the French Chiens du Chasse or German name of Jagdhunde are typical. One way to interpret their role involves seeing these dogs as chasing the Big Bear (Ursa Major) of which the Big Dipper is a large part of. One interesting feature of old French star maps is the vision of Canes Venatici as the end of a long celestial river that coursed its way past the Big and little Bears, above Leo & Cancer, and finally terminating at the Northern constellation of Camelopardalis. It's a shame that a lot of whimsical or creative objects from the old star maps haven't carried over into the modern sets that we're familiar with.

Looking towards the constellation, we can readily find one star brighter than the others. Cor Caroli was named by the English astronomer Halley (the one who found the comet) to honor the King Charles. While an unprepossessing sight to some eyes, Cor Caroli forms a pretty double star for telescope viewers. The colors of its stars form an example of just how subjective judging star hues can be. A perusal from my reliable handbook reveals the thoughts of several experienced astronomers who supplied the observations for this particular object. In their eyes, the coloring of the pair ranged from "flushed white & pale lilac", "pale yellow and fawn", "white and pale olive blue", and "white and pale copper".

The northern limits of Canes Venatici contain our next item. M51 is a great example of a spiral galaxy - so-called from the spiral form that its arms take. Also known as the Whirlpool Galaxy, M51 is certainly one of the most picturesque sights in reach of the amateur astronomer's telescope. Because we have a top-down view of M51, a telescope view will reveal the Whirlpool's curving arms flowing from the core. And while the galaxy is about 35 million light-years from us, it's bright enough to be a desirable target for star-watchers with binoculars from a dark sky area.

Looking towards the Dogs' other end, you'll find M3. M3 is another good example of a globular star cluster; an ancient, spherically shaped cluster of half a million stars located about 35,000-40,000 light-years away. The best estimate we have is that M3 has the mass equivalence of 140,000 Suns, with a light output of the 160,000 times the Sun's. The close proximity of the bright orange giant star Arcturus makes finding M3 a little bit easier for those trying to find it with telescopes or binoculars. With binoculars, you'll be able to discern a smudge of light at M3's location. But a good telescopic view will reveal a plethora of bright pinpoints coalescing towards a central blaze. 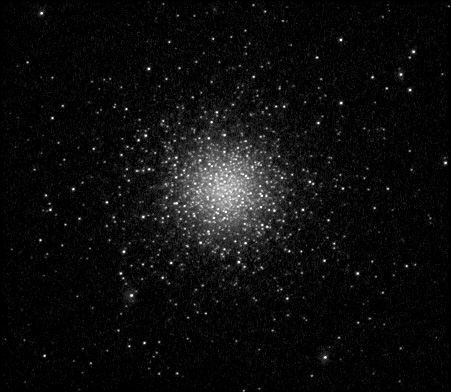